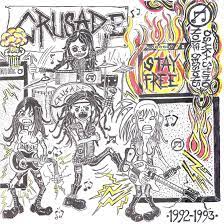 Here's what Sorry State had to say about it the first time around:

"Anthology release from this 90s Japanese crasher crust band. Generally, I try not to bring up the gender identities of musicians that I write about in these descriptions, but I think it is notable that Crusade were an all-women band, which is notable not just because all-women bands are very, very rare in the Japanese hardcore scene (Nurse is the only one who springs immediately to mind, though I may be blanking on something obvious), but because women musicians in general seem quite rare in that scene, particularly the noise / crasher scene that Crusade were involved in. I also feel somewhat authorized to bring up gender because bassist Chihiro writes eloquently in the liner notes about how some members of the scene in Osaka were skeptical that women could “really” be into punk, much less start a legit band. Well, the proof is in the pudding because Crusade did, indeed, rip. While I wouldn’t put this on the level of, say, Framtid or Gloom, the demo tracks collected on the a-side here in particular are top-notch crasher crust with a raw, brutal sound and performance to match. If you’re wondering if the band added any kind of “soft” or “feminine” touches to the music (whatever that would even mean) you’re barking up the wrong tree, because this is just pure crust brutality. "