THE MIDDLE CLASS "Out Of Vogue: The Early Material" LP 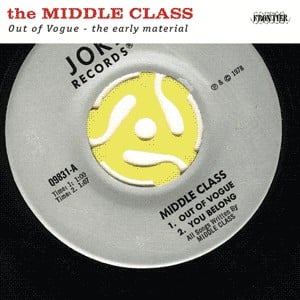 THE MIDDLE CLASS "Out Of Vogue: The Early Material" LP

Reissue of the classic gnarly almost off the rails EP along with other archival tracks. Essential USHC/Punk history.

THE MIDDLE CLASS are credited with releasing what is considered the first "hardcore " or "proto-hardcore" punk record, 1978's faster than fast Out of Vogue. With the 30th anniversary of that ground-breaking and influential EP upon us, The collection includes all of THE MIDDLE CLASS's early studio recordings, along with a never before released four-song 1977 studio demo. This pioneering Orange County band's original sides have been notoriously hard to find, landing in the collections of only those willing to pay dearly for them.