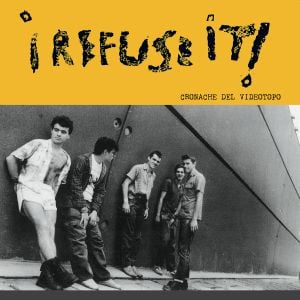 An essential 2LP vinyl reissue of the I Refuse It! compilation Cronache Del Videotopo" This long awaited re-issue compiles everything by one of the most influential and controversial post-punk combos of the "Granducato era". After more than three decades, I Refuse It! are still quite a great thing. Rock n' roll's later reaching of higher peaks of brutality finally made acceptable what once was considered noise and chaos and now make them appear just a bit less subversive, but their impact is still strongly felt. So, collecting and publishing their complete output in one album is definitely a historical act. Different from the Cronache Del Videotopo, the CD published in 2005 by Wide Records, the present double LP includes also their great version of "Atto Di Forza N. 10" from I Ragazzi Del Sole, a real gem from the '60s Italian beat repertoire. They were certainly a bit too far out for a large part of the aficionados of "classic punk" but deserved attention, at least for those who began to be tired of the old stereotypes. It's no coincidence that in a review of the Permanent Scar/Sfregio Permanente cassette (1983) in the magazine Il Mucchio Selvaggio their style was described as "experimental hardcore" and "a sort of Meat Puppets oriented sound". Finally, between 1982 and 1983, Italian punk got its spot on the international map. In fact, even if there were already some Italian punk bands, it was not before the emergence of the hardcore movement that you could really start talking about a real Italian scene. Needless to add that this was not just a simple musical issue, back in the day, for many, hardcore punk was mainly an attitude and a way of life. In Tuscany, the whole scene became known under the acronym of GDCH (Granducato Hardcore) and I Refuse It! (together with CCM, Wardogs, Putrid Fever, Traumatic, Juggernaut, and others) became one of its most significant bands. Because of their varied and multiple inspirations and tendency to experiment, it's hard to consider I Refuse It! as simply a hardcore band. This double-LP collection compiles their complete recorded output for the first time and is an essential piece of Italian punk history.