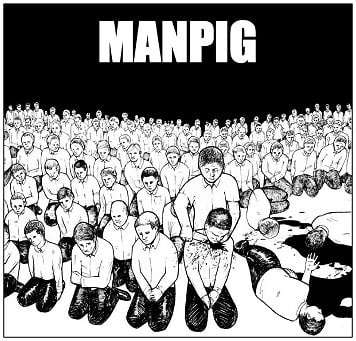 Legendary lost 1990's INFEST side project. We waited YEARS for this to exist! Classic Draw Blank procrastination at it's finest! 17 crushing tracks.

The back story on this one is way too long to get into, so let's just cut to the chase. This is a 2005 re-recording of the 1992 original recording that was lost by the studio. Drumming by RD Davies (INFEST, A CHORUS OF DISAPPROVAL) and guitars/vocals by Matt Domino (INFEST). Half of INFEST!! This ones a no-brainer. RD is currently playing with The Infamous Gehenna, and has also served drum duties for 16 and Vastum (among others.) Domino is arguably one of Powerviolence's two founding fathers, having started Neanderthal with Eric Wood more than twenty years ago, then starting Infest, and later Low Threat Profile. By this point you should know whether or not you're into this! While "The Grand Negative" certainly lacks no aggression or ligthing speed, MANPIG comes off more like a faster, streamlined extension of the nimble yet discordant mid-80s hardcore of Black Flag, Bl'ast, and Animosity-era Corrosion of Conformity than the grindy blasting preferred by most power violence bands. It's not that it lacks thrashy tendencies, but for every brief burst of speed, there are equal numbers of mid-tempo and slow moments. But unlike the legions of other bands that assemble such elements into a rough patchwork of ideas, Manpig fuse them as seamlessly and gracefully as could be expected from artists who help define the style in the first place. And these aren't simple songs either - despite their brevity, each song's component parts twist into something off-kilter and unpredictable, a stockpile of ideas distilled to their most minimal, abrasive essence with not a second wasted or a note out of place. It's a testament to the music's staying power that these songs - written twenty years ago, captured in a recording session starting almost a decade ago, and performed by people who were playing in bands before most members of the current hardcore scene were even born - still sound rawer and more genuine than almost any contemporary band. And ultimately, it's a solid set of songs, worth the twenty year wait.