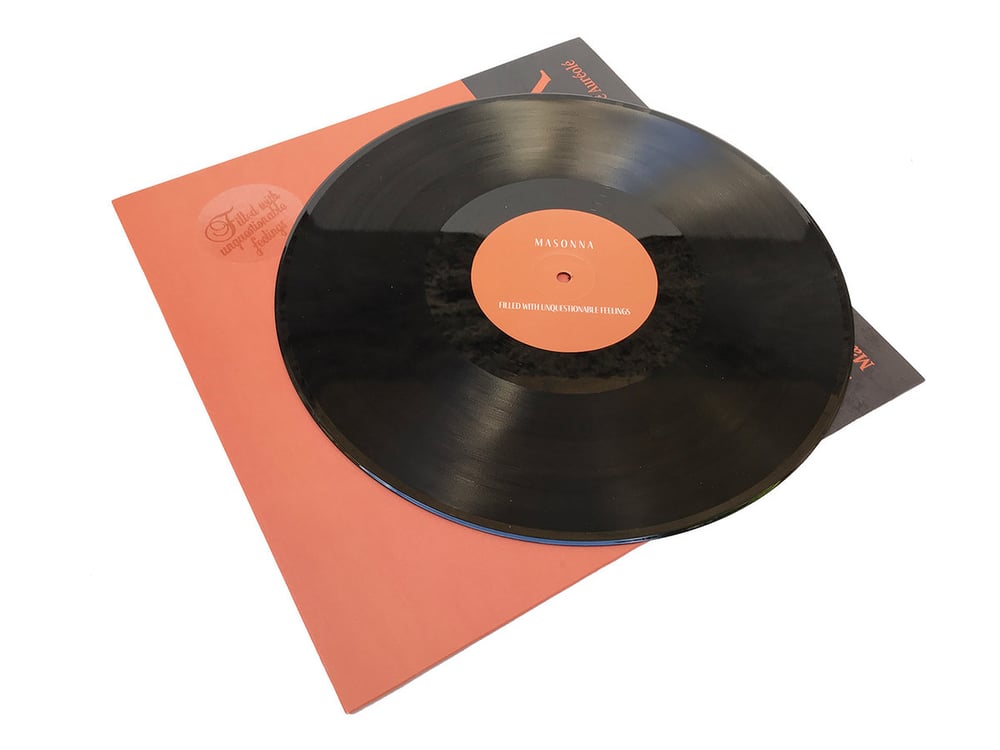 At once beautiful and remarkably challenging, Filled with unquestionable feelings, is an absolutely revelation in the wide discography of Masonna and easily one of the early contenders for the best artist release. It is reissued on black vinyl in a limited edition of 299 copies. Original tape copies are virtually unobtainable, skirting well into the three figure realm, so this one Lp is not to be missed!

Cascades of electronic noise, a psychedelic touch and vocal belching mixed together constitute the ingredients of Mademoiselle Anne Sanglante Ou Notre Nymphomanie Auréolé, the double-barreled name for Masonna. Maso Yamazaki founded his project in 1987, with a charismatic and glamorous personality who become a cult figure in “Japanoise” scene. Masonna’s abundant productions on his own legendary and astonishing label Coquette were presented in very limited edition, sometime totally confidential (one sole copy), and reflect his predilection for 60’s psychedelic music revisited in its own very peculiar way. He transforms his voice into noise, feeding the microphone back through a process of extreme distortion. His shouts become clipped bursts of overloaded sound, doubled and extended by a delay that displace the sounds into stuttered blasts of static.
Filled with unquestionable feelings along with Freak is an ultra-rare cassette originally released in 1995 by Coquette in an edition of only 36 copies and now return for the first time in a stunning vinyl format fully remastered!

The two sides of the cassette / vinyl are completely different from each other. Side A can be considered a classic Masonna piece, where it reaches its full artistic maturity here. This side is very brash, earsplitting and mad. The distortion and effects on the vocals are top notch, they in combination with his awesome screaming create a complete audio assault. Remind also to his first period as Open your cunt and Like a vagina tapes. Everything is scraped, fast and beautiful and focuses an electrically overcharged universe, punctuating the thrilling and vocal sonorous power with some quite moments and brief interruptions, conferring a very particular dynamic to work. Side B is completely different. The voice disappears (or is no longer heard because it is covered or transformed by feedback). The structure is more compact and organized but eventually becomes far wilder, building up to pointillistic bleeps and dense layers of electronic fizz that unexpectedly cut to near-silence; these bear many uncanny resemblances to the simple melodic improvs and incessant ostinatos of Terry Riley.