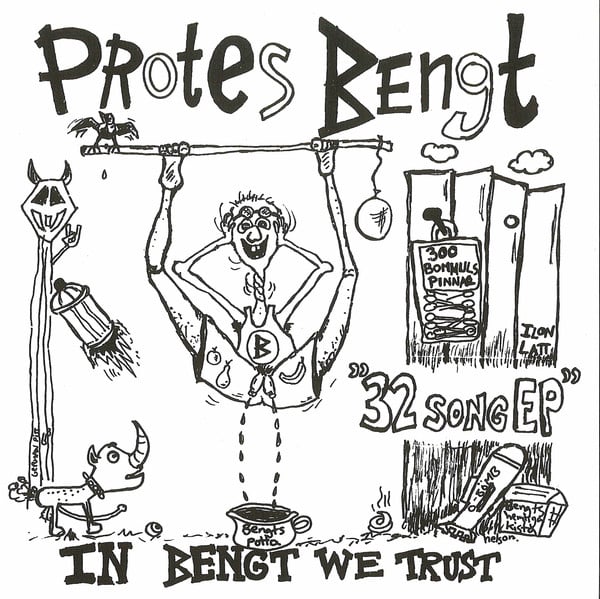 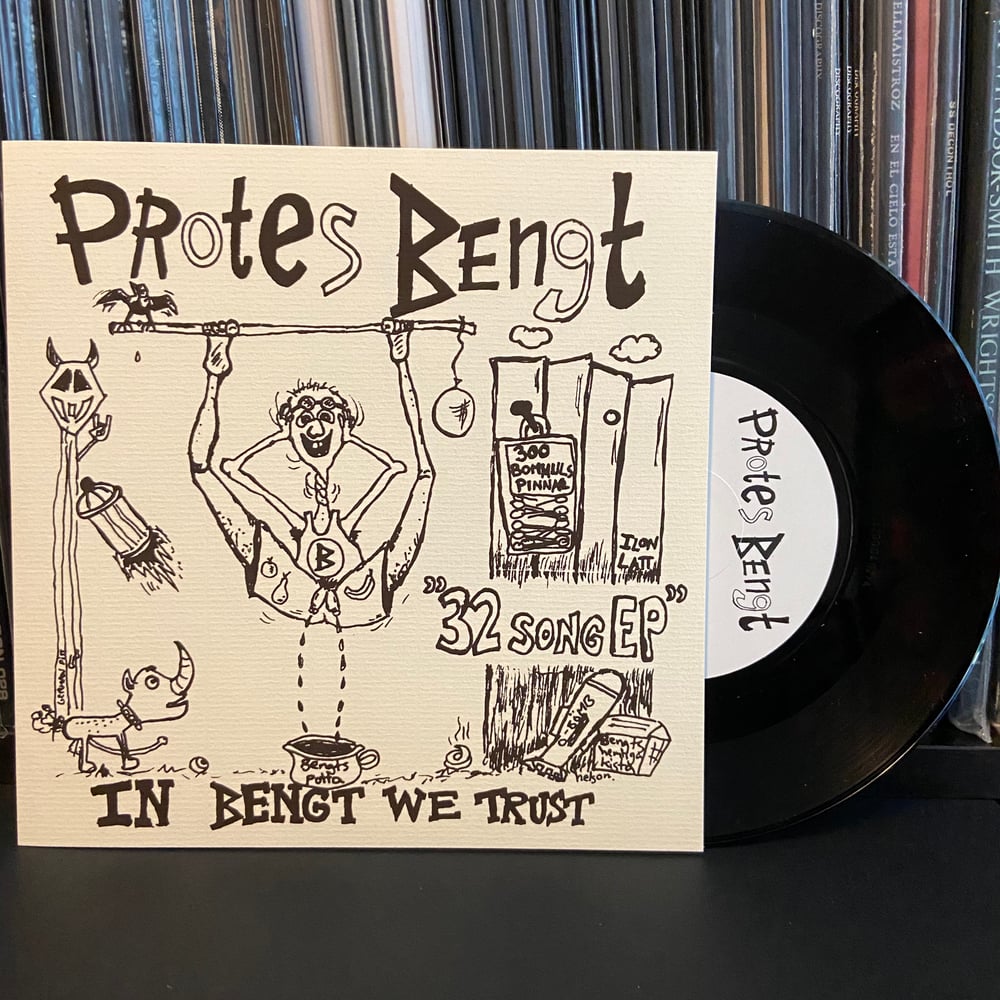 Great reissue of this Swedish HC EP from 1986.
Huge influence on Dropdead in the early days!

Both cover versions, the stickman in a cloud and the even more over the top hanging two penis guy cover available.

Repress of a classic Swedish 7“ originally released via Röj records in 1985. Protes Bengt was a blast off hardcore project by Åke from Mob 47 and Per Thunell from Filthy Christians and was basically Mob 47 with Per on vocals. The band was mainly formed to break some guys who did a tape with loads of songs. Protes Bengt never rehearsed but made two recordings. The first recording contains 74 "songs" of which 32 were released as this "In Bengt We Trust" EP. Most of the lyrics are really stupid but some have serious contents. The second recording was a 12-track demo called "Bengt e sänkt", the style had change to more one beat hardcore like Heresy, D.R.I, Lärm. If you haven’t heard this band before and if you’re into MOB 47, ROJERS, ANTI-CIMEX, SHITLICKERS and the lot, you’re probably going to die in a few seconds. PROTES BENGT featured Per (later FILTHY CHRISTIANS) and the guys from MOB 47 and they just fucked shit up with this one! Crazy, over the top euro thrash, just a millisecond before others combinded this with REPULSION and created NAPALM DEATH, AGATHOCLES or FEAR OF GOD. It’s crazy that you immediately know who’s on guitar and where it was recorded as soon as Ake comes in. I think this is why RUPTURE had the song “Ake is God”. Ake is the Kerry King of HC. What always made me think on this 7? is how Chrille, who played drums in MOB 47 and did a decent job, managed to fuck up so badly when he play a little faster. Don’t get me wrong, I love it when he nearly loses his sticks, but it’s still kinda astonishing, isn’t it. A bit of collector trivia: 1000 copies were made and when the band ordered a second press, the pressing plant mixed up the plates and pressed 1000 more of the MOB 47 EP. They kept them, made new sleeves and sold them. I think there was a repress of this too with a different sleeve. And yes – the demo that followed after this blows it to pieces. It’s incredible!!! The fucker has 32 tracks. Seat belts on? Ready?