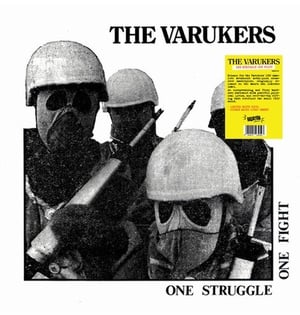 2022 repress of this long out of print LP from 1985, an absolute breakneck metal-punk crossover masterpiece, originally released on the band's own Liberate label. An uncompromising and fiery hardcore statement with powerful political lyrics, and over-the-top riffing that redefined the whole UK82 sound.

Varukers were one of the best English bands of the 80s. Their early 80's material was a great mix of Discharge and slightly more punk bands like One Way System or the Partisans. This LP saw the Varukers heading into a much heavier more hardcore and metal influenced direction. It was very much in step with the tenor of the times coming out in 1985, it's hardcore punk meets metal sound put it on par with contemporary bands like Antisystem and Antisect. The Varukers broke up soon after this LP, only to reform in the 90's and are still going strong today.